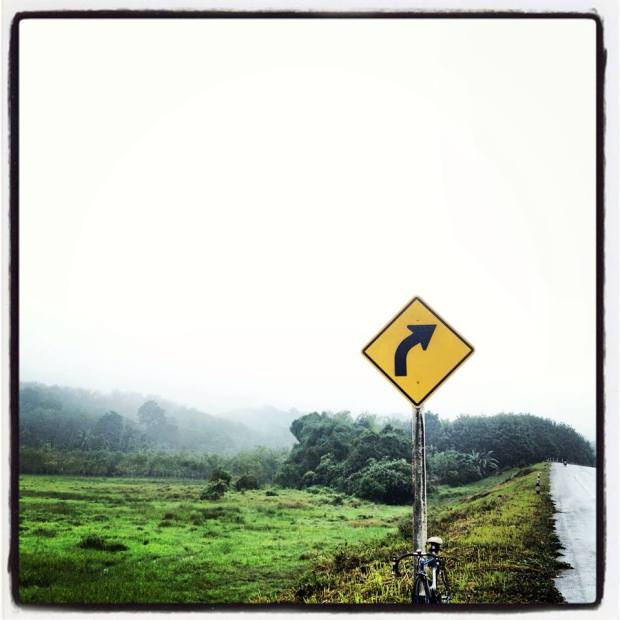 Bike takes me as far as my heart cry for. I don’t do laps in my training ride. This mean that I have to ride far out from the city. My favourite route is called 418. It is one of the most recent highway in Thailand and it is one of the best. Route 418 was designed to connect 4 southern provinces of Thailand in the most direct and efficient way. There is no intersection on the highway. There are overpass bridges and huge roundabout. The section I rode is connecting Pattani-Yala-Route 4 to Songkla. As it was like drawing a strait line from Yala to Pattani, 418 cut into one of the most active area of insurgency. Regular road contractor could not make this route happen since in the early days of insurgency road contractors were the target of shooting as they are working far out in the country. Hence route 418 was built by the Army. It is 4 lanes highway with very clean and wide side way perfect for a bike ride. From Pattani, it would run strait line rolling up and down on the overpass bridges. 10Km into Yala there is a short 4% hill to climb to wake me up from the trance of 35km down the green heaven comprise of rice paddies and rubber plantations. Very few road blocks and soldier barricade compare to others highway in the area. However, Humvy with machine gun or walking patrol is a common sight. You can gauge the severity of the situation by counting patrolling unit along the highway back and forth. Sometimes helicopter patrolling can be spotted. Walking patrol is quite scary since they are looking to the side of the road for suspected bomb site. Insurgence would dig a hole under the road to put the bomb inside and aim for their target driving by. Of course patrolling unit is one of their likely target. Other than the serious of the situation and the danger of it, riding along 418 is an easily enjoyable ride. Once a year there will be a race along 418 connecting Yala to Pattani 70km. One of the best race since it is the only time you can put your head down and hit the road. Not having to worry about how good the race officials are blocking the intersections. Green everywhere all year round. Highway is relatively quiet and calm. It is my favourite ride in the area. I would spend approximately 420Km out of 500km on this peaceful highway. Even though it is quite difficult to tell anyone that I’m riding on this route alone by myself even to the bikers who frequently spending time on the same route in group. But for me the ride is define by the bike, myself and surrounding become one. As I said earlier, “I might as well enjoy it”.

I live in Pattani, Thailand. One of the Southern most province of Thailand close to Malaysia border. Twenty years ago even Thais have trouble locating Pattani on Thailand map. Not until recently Pattani was included in an incident called “South Thailand Insurgency“, embassy of most country issue a warning not to travel to the area or else void your life insurance. Now everyone know Pattani and everyt time when I tell someone that I am from Pattani something changes in their mind and their face. It started 10 years ago on 2004. Now everyone living in the area know someone in person who was affected by incidents. This could be bombing, drive by shooting, arson or raid with assault rifle. It was so bad that carrying a conceal weapon is legal. Police and soldier having lunch with M16 on their lap. Just drive to work on certain day could be so challenging. My three bikes were hung up on the wall since the start of the incident as my wife told me that she would file a divorce if I pick up my bike and ride to work. My family business was burned down three times. Some nights I have to load my guns preparing for the worst after soldiers in the area came to warn us of potential attempt on our business for one more time. Ten years has passed but nothing seem to improve much. However, we changed. We have kids and we view our life differently. Now I ride my bike to work. My wife got herself a bike and my training ride take me to where it consider red area so far out of the city. I want to take this opportunity to write about my hometown and our life riding #Festive500. I have never ride so far like this before. In my life I have ridden 100km only three times, months apart. My training ride usually 40km and 60km for the long ride. It also depends on the situation. When I have down from bedroom seeing my gun and shotgun fully loaded from the night before and grab my bike. I would think “now it is safe to ride, let’s do it”.  But 500Km in 8 days would force my to ride no matter what (in fact I have only 6 days to ride since I knew about Festive500 late for 1 day and I have full working day on another day) So if I wake up realise the situation thinking “this could be my last ride” then I would have to tell myself “I might as well enjoy all of it”